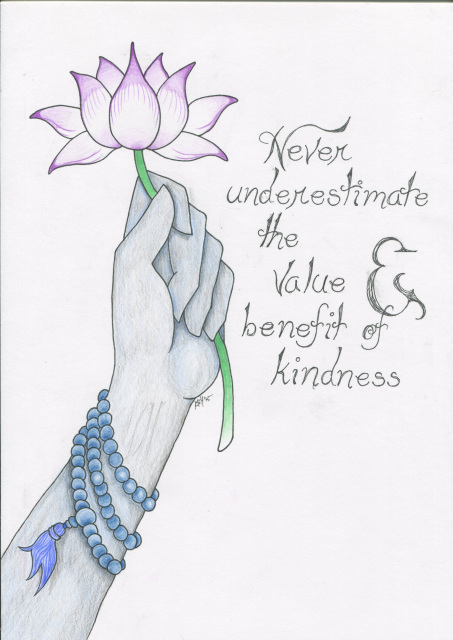 SKU:
CA$20.00
CA$20.00
Unavailable
per item
I originally posted this piece with the below blog - which I have since re-written and recorded as a podcast for Everything is Workable.

Everyone is basically good. This doesn't mean everyone can't also be a total asshole sometimes. And that also means you are occasionally a total asshole - whether you realise it or not.

Which is rather liberating really because it means you don't have to be perfect. But you certainly can be kind and compassionate, and ultimately, that’s what basic goodness is about.

The idea of ‘basic goodness’ as I understand it from studying the Dharma, is not ‘good’ in the sense of virtuous or correct but good as in: we all want to be happy. The best way I ever heard it put was by Pema Chodron when she said, “No one does anything because they want to feel worse.”

When we put on a jumper because we feel cold, when we shift position so a limb doesn’t fall asleep, when we put a band-aid over a paper cut so it doesn’t sting - these are all signs of our basic goodness. Our basic compassion and care and kindness.

It may seem easy to argue against basic goodness. We could say that the news is full of examples of basic badness. People kill each other every day. People shoot, bomb and set-fire to others.

It might seem totally naive to say people are basically good in light of the atrocities that are committed on a daily basis.

We feel like, if we would just bring the world to a perfectly fixed stand-still with everything totally in balance, then we might feel sane.

So we act foolishly, carelessly, even unkindly or outright viciously. Some more vicious than others. But these actions are still based on this basic goodness, this basic longing we have to be happy.

The teachings on basic goodness are not saying that we are virtuous. They are saying we all have a longing to connect to happiness, to feel love and belonging.

Cynics (And cycnism is healthy - no teaching has any value if it doesn’t agree with your own sense of reason. You don’t have to buy any of it and it’s important to test it against your own experience of the world) might say, “Someone who shoots up a school or who convinces a ten year old to be a suicide bomber is evil.”

Verse 6.39 in the Bodhicharvatara provides a helpful contemplation in this regard:

If those who are like wanton children
are by nature prone to injure others,
what point is there in being angry -
like resenting fire for its heat?

This asks us to consider - if we believe that some people are basically bad then we’re rather foolish for resenting them. Resenting someone for their supposed inherent nature would be like getting angry at a rock for being hard or fire for being hot.

What greater proof of basic goodness do you need than our expectation that someone shouldn’t harm us? We only think people should know better because we believe they CAN know better.

In fact, our very shock at reports of violence, our aversion and disbelief, is further proof of this basic goodness. If we truly believe that people are basically bad then we would never be surprised by the things we read in papers.

And when we read something horrific and we think to ourselves, “I can’t imagine being angry enough to kill for my belief,” that is a sign of our own basic goodness.

The things we do that cause harm are not born of some inherent evil within us. We are all confused beings scrambling in the same impermanent world. Not a single living creature doesn’t want to feel safe, secure and content. This is the motivation for our actions.

When a natural disaster occurs I can’t help noticing that the first thing people do, when they realise they can’t do anything else, is reach out to help one another.

The bodhisattva lives by this. The bodhisattva sees clearly that ultimately, every situation is unknowable and the greatest thing they can do is be there for others. They accept that the world is not a fixable place. There is no single idea of what a ‘perfect’ world would be and even if there was no war, no famine and we weren’t a threat to one another, we would still have to contend with old age, sickness and death. They realise and accept that the greatest gift we can give is to be present for others, to care for them, and to be kind.