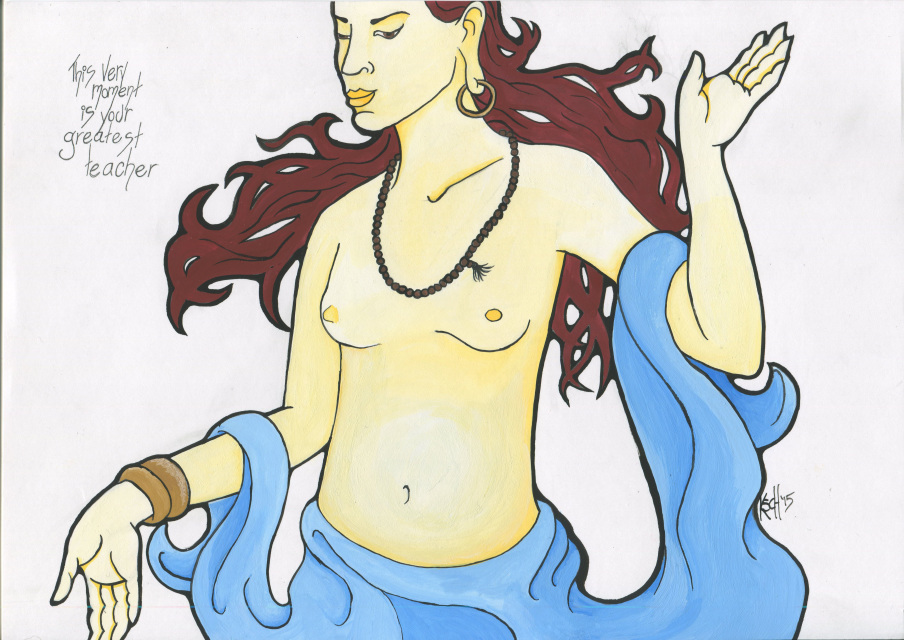 This Very Moment A4 Landscape Original

In one of her many talks Pema Chodron tells this story about having a lot of anxiety bubbling up for an extended period of time. It was relentless and she kept sitting with it and working with it and finding that it just wouldn't go away, so eventually she went to her teacher and told him about what was going on.

Her teacher was very receptive and had a lot of questions. He wanted her to really go into great detail about the sensation, where it was, what it felt like, did it have a texture or a taste? She described it for him as intimately as she could and then he clapped and said, "Ah! That's the Dakini bliss!"

This was the first and only reference to a Dakini I had heard in all my study and practice until a few months ago. In Pema's story she goes on to say that she realised that bliss did have the same intense qualities as the anxious feeling she was describing and she was eager to get back to meditation - but when she did the feeling had gone because her resistance to it had gone.

I thought Dakini was just a Tibetan word for an an emotion or something. In September last year I learned just what, exactly, a Dakini was.

In fact, pin-pointing the ‘what’ is a bit of a challenge as the Dakini comes in many forms, but the essence is she is a representation of wisdom in female form. Although even that is an over-simplification from what I’ve learned thus far.

I am the very fortunate owner of a signed copy of Dakini’s Warm Breath by Judith Simmer-Brown. I’ve also found Dakini stories popping up in talks I’m listening to by various teachers. My understanding of the Dakini is that they show up when you’re ready for them.

This piece itself was one of those ones that was entirely unplanned. I sat down to sketch one evening and found myself drawing a Dakini. I decided to paint her using gouache, something I’ve not worked with in some time, and the words came to me during this process.

I do feel this is just the first of many I will create as I continue my Dharma series. I also want to delve deeper into the words and why I chose them but at this moment I'm finding a total lack of flow in that regard. I will revisit the topic as the whole practice of life and experience as teacher is something I'm coming to appreciate more and more every day.
Send me an email if you'd like a print of this piece.